The fire on board the VLCC Zoha 1on Wednesday evening claimed the lives of two seafarers and injured eight others, according to Indian officials.

The Zoha 1caught fire about 20 miles off the coast of Sharjah, UAE on Wednesday, sending up a plume of smoke visible from the city's waterfront. Indian consular officials told Gulf News that the blaze killed two Indian nationals. Eight other people, including two Indian seafarers, were injured in the accident, and three remain missing. 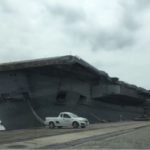 The French Courts stopped the scrapping of the asbestos-laden aircraft carrier Clemenceau on the beach of Alang, India. Fifteen years later, France is faced with a second toxic headache.

The Clemenceau’s sister ship São Paulo (ex Foch) will soon be dismantled and the French government must approve of the dismantling destination.

The vessel was sold by the French Navy to Brazil in 2000, where it became the new flagship of the Brazilian Navy. After countless serviceability issues, which impeded the...

By Kate Holton and Guy Faulconbridge – LONDON, Jan 31 (Reuters) – The United Kingdom leaves the European Union on Friday with a mixture of joy, anger and indifference, casting off into the unknown after nearly five decades and dealing a blow to Europe’s drive to forge unity from the ruins of World...

The delisting comes just days before temporary waivers allowing business with COSCO Shipping Tanker (Dalian) were set to expire. It also follows shortly after the successful negotiation of a "phase one" trade deal between Beijing and Washington,...

Via Youtube The daring subject went swimming with these huge reptiles, without imagining what his unusual reaction would be when he noticed their presence.

Through Youtube, a video has been published that has gone viral and has impacted thousands of users, because it reveals the precise moment in which a daredevil man throws himself into a swamp full of fierce alligators, who pounce on him when they see him in their space. The incredible clip did not take long to become a trend in various social...

Find out more or adjust your settings.

This website uses cookies so that we can provide you with the best user experience possible. Cookie information is stored in your browser and performs functions such as recognising you when you return to our website and helping our team to understand which sections of the website you find most interesting and useful.

Strictly Necessary Cookie should be enabled at all times so that we can save your preferences for cookie settings.

If you disable this cookie, we will not be able to save your preferences. This means that every time you visit this website you will need to enable or disable cookies again.

Please enable Strictly Necessary Cookies first so that we can save your preferences!